Mass Movements-What Charlie Hebdo Taught us About Being True Believers 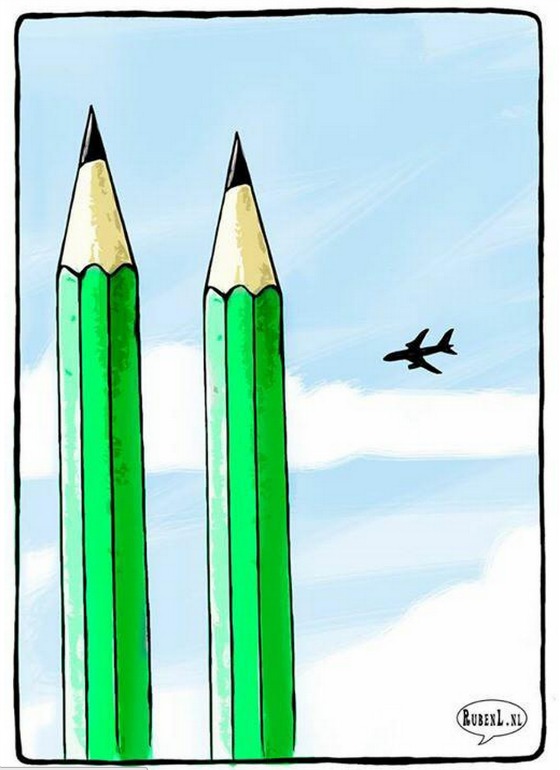 Thoughts on the Nature of Mass Movements

While I usually try to avoid controversial subjects because of the emotions that can be stirred, I do feel the need to address the horrific events that took place at in France this week with the slaughter of a dozen people at Charlie Hebdo, the French satirical publication, and the four hostages killed in another incident. In the wake of 9/11 and at the height of suicide bombings in Israel in 2003 and 2004 I wrote about those events as well for our CWS investors. I tried to take an as dispassionate point of view as possible and look at the events from a psychological standpoint and what investment implications may materialize if any. I thought it would be helpful to refer back to some of what I wrote over 10 years ago and how influenced I was by Eric Hoffer and his book The True Believer. It was published in 1951 and has the sub-title of Thoughts on the Nature of Mass Movements.

France is in the throes of a wave of Islamic fundamentalism and it is creating tremendous challenges for French society.  This fundamentalism fits completely into the definition of a mass movement.  Hoffer studied communism, Imperial Japan, Nazism, Islam, and Christianity, and concluded that each mass movement had certain common characteristics.  Since most mass movements tend to wreak great havoc and destruction during their most intolerant phases, the purpose of this post is to apply Hoffer’s characteristics to Islamic fundamentalism in order to enlighten readers to the psychology and the mindset by its participants and those carrying out atrocities. While I cite a large number of lengthy quotations from Hoffer in this article, I could not come anywhere close to communicating so effectively about this subject. He truly is a master writer and thinker while being incredibly efficient with his choice of words.

What Hoffer elucidates, however, is how the psychology of the individual needs these anti-modern characteristics to survive.  I will cite examples from Hoffer that will explain why the culture of martyrdom, suicide bombing, and terrorist attacks are actually a logical course of action and why perhaps what we’re seeing is as much a civil war for the heart of Islam between modern and anti-modern forces as it is an attack on western values and our way of life. As we’re seeing throughout the Arab world in particular, any attempt to reform Islam to become more tolerant, open, and democratic may result in a civil war and enormous instability.  As Hoffer says, “the cause of revolution in a totalitarian society is usually a weakening of the totalitarian framework rather than resentment against oppression and distress.”

In order for a mass movement to form, individuals need to be susceptible to becoming blindly obedient. “We join a mass movement to escape individual responsibility…to be free from freedom…This sense of liberation comes from having escaped the burdens, fears, and hopelessness of an untenable existence.”  This deep unhappiness with one’s self has enormous implications.  “Nothing that has its roots and reasons in the self, can be good and noble.  Their innermost craving is for a new life-a rebirth-or, failing this, a chance to acquire new elements of pride, confidence, hope, and sense of purpose and worth by an identification with a holy cause. An active mass movement offers them opportunities for both.”

Americans believe that Western-styled democratic governments with free market economies are the answer to giving citizens the best opportunity for maximizing their potential and having the highest standard of living.  History has proven we’re right.  Unfortunately, most cultures have very little experience with empowering citizens with personal responsibility and risk-taking.  This scares the hell out of most people in the world.  As Hoffer says:

“The ideal of self-advancement which the civilizing West offers to backward populations brings with it the plague of individual frustration.  All the advantages brought by the West are ineffectual substitutes for the sheltering and soothing anonymity of a communal existence…The discontent generated in backward countries by their contact with Western civilization is not primarily resentment against exploitation by domineering foreigners.  It is rather the result of a crumbling or weakening of tribal solidarity and communal existence.”

Americans cannot understand how individuals can act so irrationally and be part of an organization with very little regard for the truth or reality.  Think Al Qaeda and ISIS when you read the following:

“It is futile to judge the viability of a new movement by the truth of its doctrine and the feasibility of its promises.  What has to be judged is its corporate organization for quick and total absorption of the frustrated.”

Martyrdom and suicide bombers are classic byproducts of extreme mass movements.  By divorcing the individual from his humanity, the mass movement creates people willing to die for the cause.

“The fully assimilated individual does not see himself and others as human beings…He has no purpose, worth and destiny apart from his collective body; and as long as that body lives he cannot really die…We are ready to sacrifice our true, transitory self for the imaginary eternal self we are building up, by our heroic deeds, in the opinion and imagination of others.”

Another critical technique is to paint a picture of an ideal future that can only be attained by ridding oneself of the terrible present.

“Not only does a mass movement depict the present as mean and miserable – it deliberately makes it so…To a religious movement the present is a place of exile, a vale of tears leading to the heavenly kingdom…There is no more potent dwarfing of the present than by viewing it as a mere link between a glorious past and glorious future…The preoccupation with the past stems not only from a desire to demonstrate the legitimacy of the movement…but also to show up the present as a mere interlude between past and future…The true believer sees himself part of something that stretches endlessly backward and forward – something eternal.  He can let go of the present (and of his own life) not only because it is a poor thing, hardly worth hanging on to, but also because it is not the beginning and the end of all things…They are participants in a soul-stirring drama played to a vast audience – generations gone and generations yet to come.”

“We are less ready to die for what we have or are than for what we wish to have and to be…Craving, not having, is the mother of a reckless giving of oneself…In all ages men have fought most desperately for beautiful cities yet to be built and gardens yet to be planted…Dreams, visions and wild hopes are mighty weapons and realistic tools.”

“An active mass movement rejects the present and centers its interest on the future.  It is from this attitude that it derives its strength, for it can proceed recklessly with the present – with the health, wealth, and lives of its followers.  But it must act as if it had already read the book of the future to the last word.”

To inculcate the importance of dying for the cause, the act of death must become ritualistic and dramatized.  Think of the videos made by suicide bombers and decapitations captured on camera by ISIS to carry out their “martyrdom” and murder missions.

A society and people must be willing to suspend belief and find very little value in facts and reality to be susceptible to mass movements and self-sacrifice.

“The readiness for self-sacrifice is contingent on an imperviousness to the realities of life.  He who is free to draw conclusions from his individual experience and observation is not usually hospitable to the idea of martyrdom.  For self-sacrifice is an unreasonable act.  It cannot be the end product of a process of probing and deliberating.  All active mass movements strive, therefore, to interpose a fact-proof screen between the faithful and the realities of the world.  They do this by claiming that the ultimate and absolute truth is already embodied in their doctrine and that there is no truth nor certitude outside it.  The focus on which the true believer bases his conclusions must not be derived from his experience or observation but from holy writ…To rely on the evidence of the senses and of reason is heresy and treason.  It is startling to realize how much unbelief is necessary to make belief possible.  What we know as blind faith is sustained by innumerable unbeliefs…Strength of faith…manifests itself not in moving mountains but in not seeing mountains to move.”

“Thus the effectiveness of a doctrine should not be judged by its profundity, sublimity or the validity of the truth it embodies, but by how thoroughly it insulates the individual from his self and the world as it is…In order to be effective a doctrine must not be understood, but has rather to be believed in.  We can be absolutely certain only about things we do not understand.  A doctrine that is understood is shorn of its strength (think tech stocks!)…One has to get to heaven or the distant future to determine the truth of an effective doctrine.”

“The urge to escape our real self is also an urge to escape the rational and obvious.  The refusal to see ourselves as we are develops a distaste for facts and cold logic.  There is no hope for the frustrated in the actual and possible.  Salvation can come to them only from the miraculous, which sees through a crack in the iron wall of inexorable reality.  They ask to be deceived.”

“By kindling and fanning violent passions in the hearts of their followers, mass movements prevent the settling of an inner balance…[H]is sense of security is derived from his passionate attachment and not from the excellence of his cause…He embraces a cause not primarily because of its justness and holiness but because of his desperate need for something to hold on to…he sees in tolerance a sign of weakness, frivolity and ignorance.  He hungers for the deep assurance which comes with total surrender – with the wholehearted clinging to a creed and a cause.”

These unsettling words paint a very accurate picture of Islamic fundamentalists in general and terrorist martyrs in particular.  Hoffer’s writings provide tremendous insight into the reasons why mass movements develop and people sacrifice themselves completely for the group and a better world.

With huge fissures in French society and large anti-Muslim protests in Germany, as well as protests in other European countries, Europe is going to face enormous societal challenges. It’s already dealing with horrendous demographics with the prospect of shrinking populations over the next 25 years or so and almost all of the growth coming from immigrant communities. We are not immune to some of the issues Europe is facing in the United States but I do believe we have done a much better job of assimilating immigrants into our society.

France has been the traditional guiding light of liberty and tolerance but my sense is we are going to see far more intolerance and lack of freedom as the Islamic civil war continues to unfold and do battle in France and other Western countries. Your thoughts?

I wanted to share with you the extraordinary way in which my team secured the rights to use the Dutch political cartoon many of us had seen in the news and on Facebook and Twitter. The cartoonist, Ruben L. Oppenheimer, lives in the Netherlands so we reached out to a colleague in the Netherlands who just happened to have a friend, who’s cousin had a connection to Mr. Oppenheimer. Within an hour, we had a text message from the author allowing me to use this brilliant cartoon here in my blog. All of our communication was via social media.

If you aren’t connected to me within social media now’s the time to act: