Global Warming - Then and Now 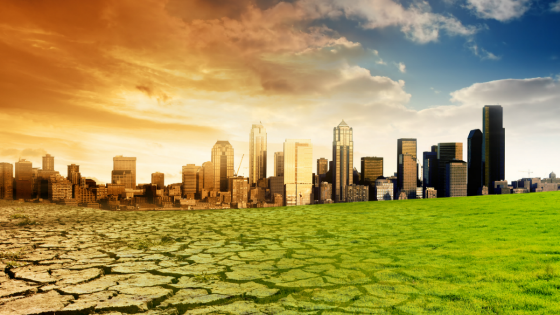 The impassioned plea that took place recently from teen climate activist Greta Thunberg at the U.N. understandably caught the attention of much of the developed world. At the risk of being controversial/politically incorrect I decided to do a couple of searches on www.newspaperarchive.com on “Climate Change” and “Global Warming” and restrict the years to between 1919 and 1965 to see if these were topics covered by newspapers back then and, if so, what the data showed and what theories were prevalent at the time.

My brief research shows that many of the same concerns were prevalent 50 to 65 years ago. Obviously, the population has grown significantly since then and we are much more industrialized. I don’t deny that the world’s temperature is rising. What I struggle with is that we have had heating and cooling cycles independent of human behavior so it’s hard for me to know in such a complex system how much is man-made and how much is natural. With that being said, I generally don’t have an issue with acting as if man is a significant contributor through our CO2 emissions. We also must also accept that there may be unintended consequences from moving away from very reliable forms of energy like coal and nuclear and replacing them with solar and wind as they are not nearly as reliable. Of course, we are always innovating so I’m sure improvements are on the horizon in this regard.

This chart caught my attention. It shows that while current temperatures have risen somewhat sharply recently, they appear to be on the cooler side if this chart is accurate. 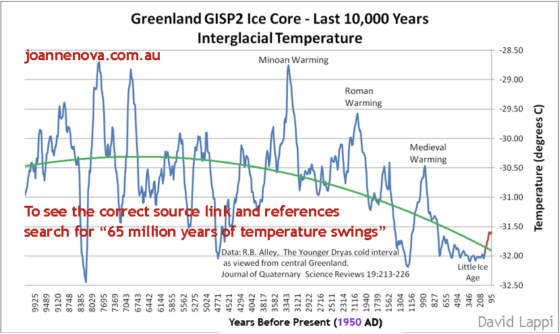 Regardless, many scientists believe we are on the precipice of disaster as this recent headline shows.

Global Warming – Going Back in Time

Now it’s time to move back in time.

I thought you would find these articles interesting. I also added a couple of other non-related ones that I found entertaining as well in the course of doing my research.

In this first blurb, the writer points out that if the lack of icebergs is any indication then the world is warming. This is from 1952.

This is from the same paper and it’s about a boy who committed burglaries and was sentenced to prison but was too fearful to give his real identity because of how his parents might react. He said he was 17. He eventually felt guilty about how worried his parents must be and eventually confessed to his true age and identity. His parents thought he had died so I’m sure they were quite relieved. He was a model prisoner and prosecutors sought to have him freed because of him being a minor. 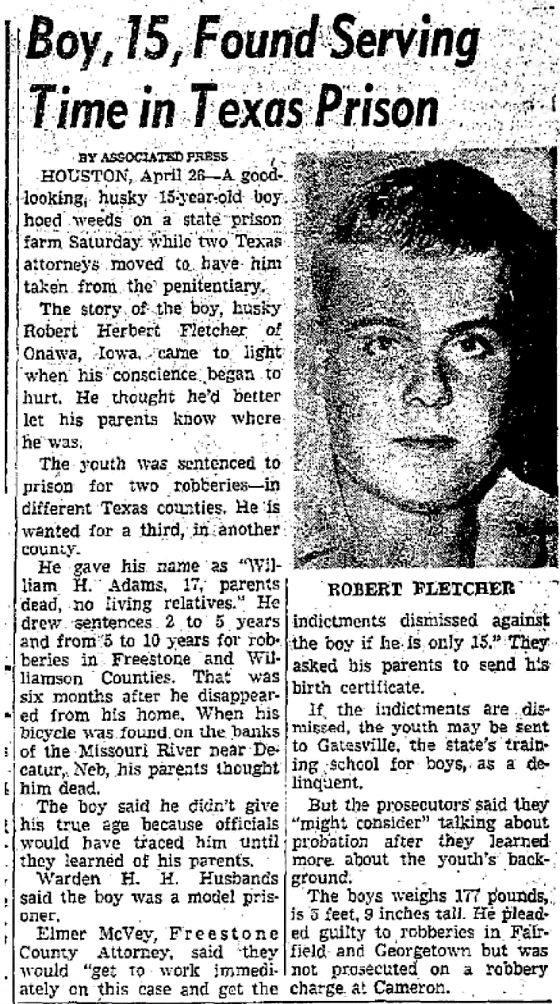 This next article was from late 1952. 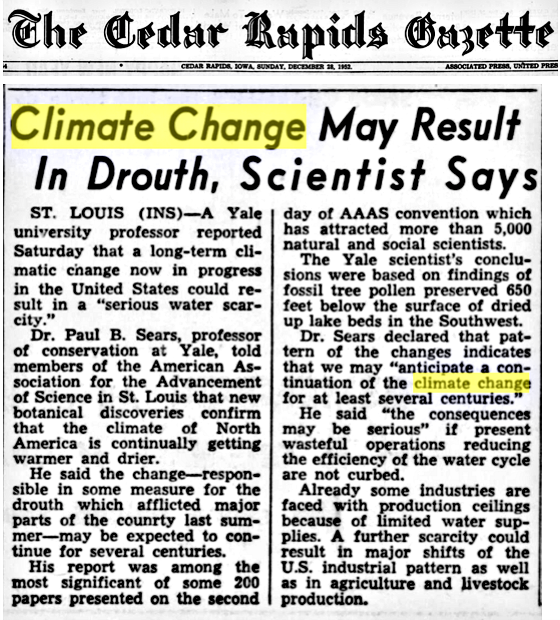 This was is from 1953 and the author points out man’s arrogance believing that its activities can impact the climate. 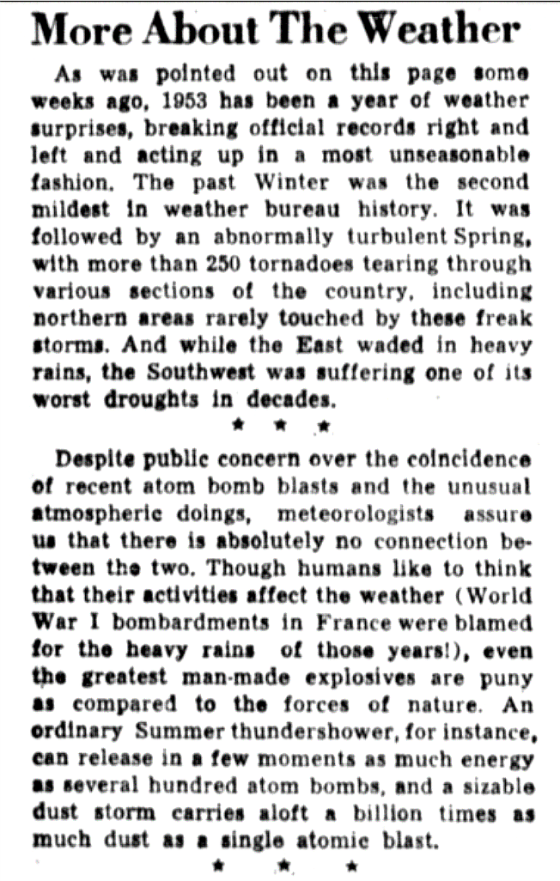 The article goes on to acknowledge that 1953 was a freakish year for the weather. Despite this, weathermen assert that it represented normal variation. With that being said, they also acknowledge that the planet had been getting warmer over the last 100 years. One of the attributed causes was a lack of volcanic activity and the other was increased global industrialization, particularly related to the destruction of forests. More CO2 is being produced and less is being absorbed. Sound familiar?

This one from the same paper caught my attention. Apparently a sympathetic gentleman to the cause of the Yakima Indians showed up at a Senate hearing in full chief regale and testified in front of a committee advocating for the tribe’s cause. It turns out he was a black man who worked as a bellhop and the members of the tribe said they had never met him before. A very impressive feat in my book.

This article from 1957 speaks to the risk of carbon dioxide not only causing a lot of pollution and drought but also warming the globe. 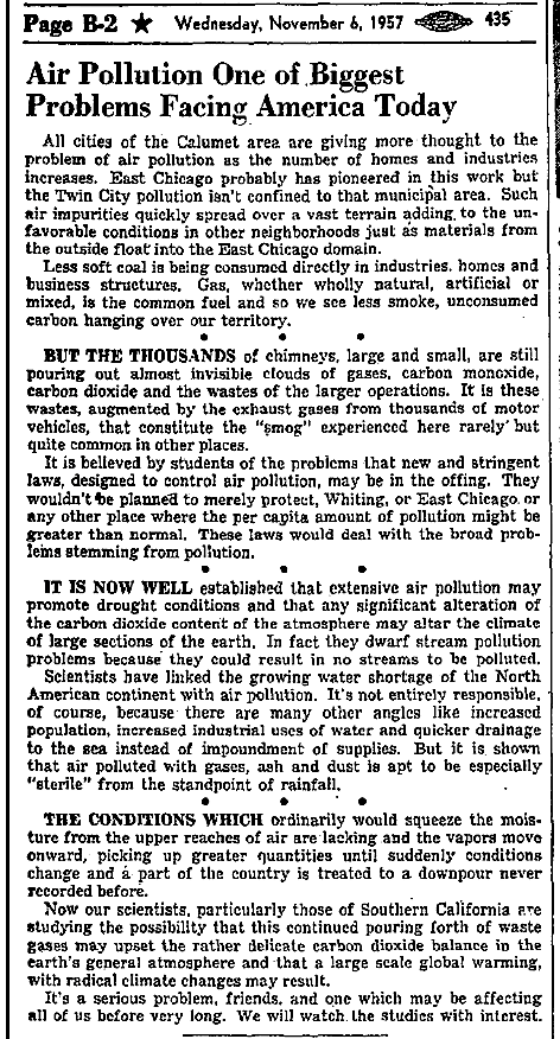 Who says Jeff Bezos and Elon Musk were the pioneers in terms of colonizing Mars? The Japanese were way ahead of these two illustrious American entrepreneurs. 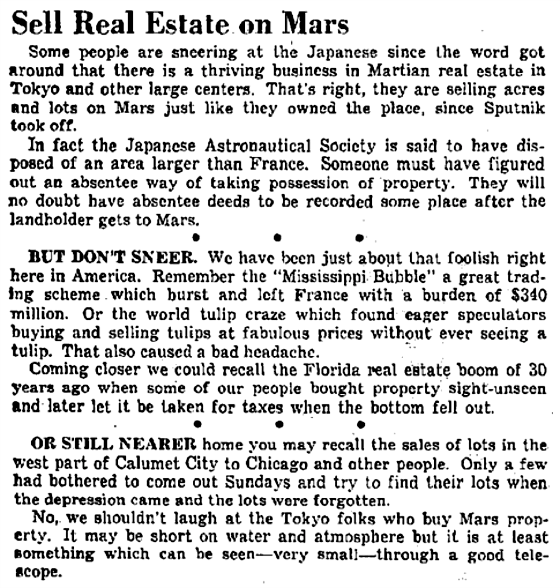 This next one is from 1963 and, as the headline states, the person being interviewed believes that the earth was now in a cooling mode. Between 1885 and 1940 the earth’s temperature had increased by approximately 1.5 degrees and in the following 23 years had cooled slightly by ⅓ of a degree, bringing it back to the level of the 1920s. The author then asks the subject of the interview whether nuclear testing was a cause of raising the earth’s temperature to rise as many people suspected. This seems to be a logical thing to ponder. And it doesn’t get any more man-made than this. He said it would take at least 15,000 atomic blasts to raise the temperature of the earth by one degree. He then brings up solar activity, or lack thereof, as a contributor to the globe’s temperature change. I have personally felt that is an underappreciated variable but what do I know? 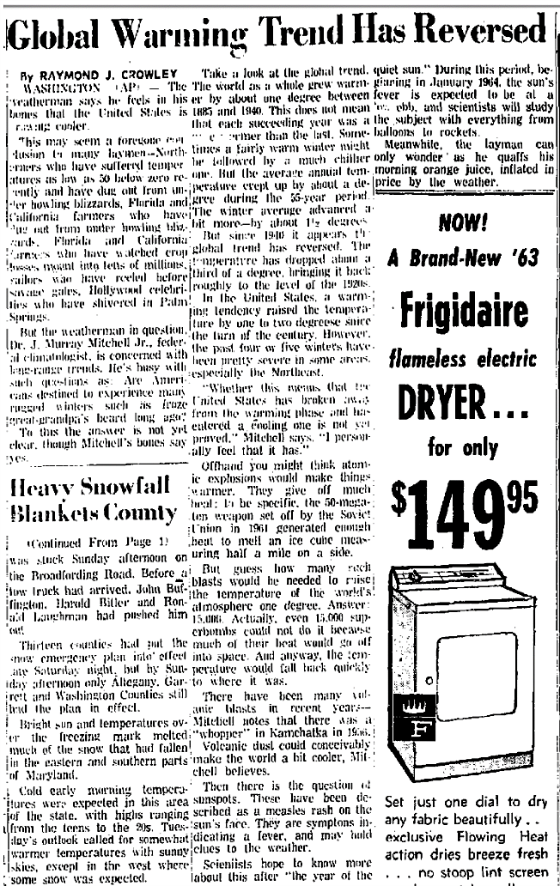 In this 1965 article, an amateur astronomer laments the use of coal by American society and how it could cause global warming. This is obviously a similar concern to today. And while the United States has cut back quite a bit on its coal consumption (it’s at the lowest levels in 40 years), the world has finally flattened out its consumption after tremendous growth from Asia as the following chart shows. 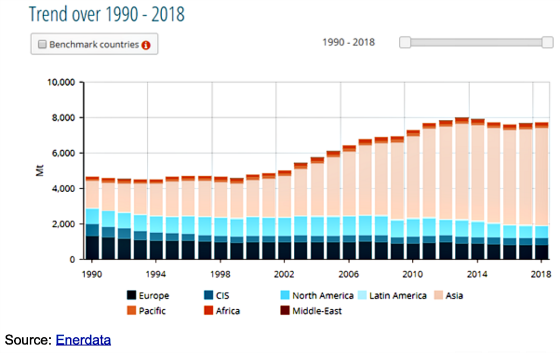 From my cursory review of newspaper articles from more than 50 years ago, it would appear that many of the same issues we are concerned about today were part of the consciousness of society then as well.