Ghosts of Inverted Yield Curve Past 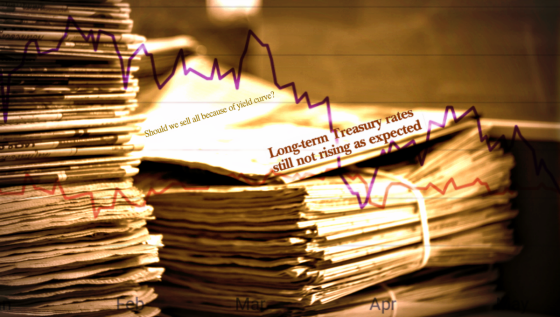 And all the roads we have to walk are winding

And all the lights that lead us there are blinding

-Wonderwall by Noel Gallagher (for Oasis)

I saw a double bill of Noel Gallagher (formerly of Oasis) and Smashing Pumpkins last week. I’m a big fan of Noel’s and took a picture I rather liked so I wanted to find a way to weave it into this post. Hence the snippet from Wonderwall above. 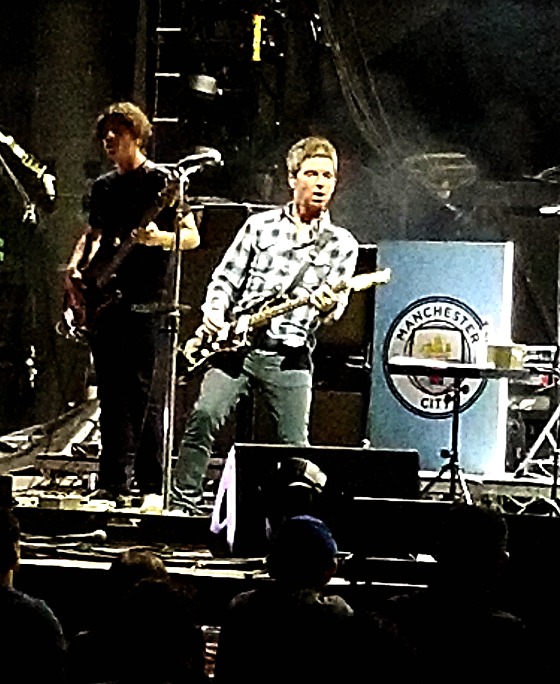 And for you Billy Corgan and Smashing Pumpkins fans, this one’s for you. 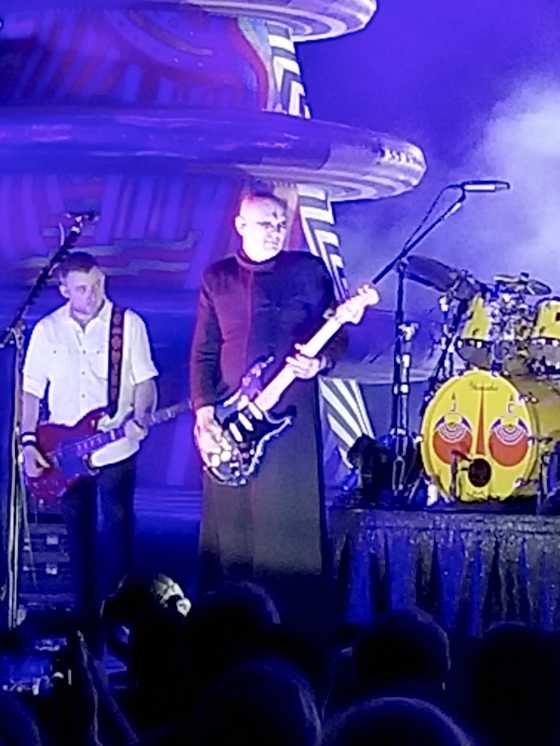 From an investor’s perspective, Noel Gallagher is correct in saying that there is no straight line or road to success and we never have full clarity as we are always working with imperfect information and our own biases and emotions. Now that the yield curve has inverted between 10s and 2s, as the following graph shows, I wanted to see if there was anything I could learn from the past to make the road a little less windy and blinding.

Taking a longer point of view one can see that the starting years for the last two inversions were 2000 and 2006.

I often like to turn to old newspaper articles to see what was happening in real-time and what people were thinking when similar conditions were present. I decided to do this around those times (2000 and 2006) to see what market pundits, economists, and investors were saying about the yield curve inverting.

This is an interesting article about how the benefits of technology may have an impact on the shape of the yield curve in the future.

Often times people can be right for the wrong reasons. I would chalk this one up to being wrong but for the right reasons as the following excerpt shows.

The strategist was right about technology having a deflationary impact which would help bond prices by lowering interest rates. He was wrong about “substantial yield-curve inversions [becoming] the standard curve shape, provided the relevant economy is experiencing technology-led growth.” I think it’s quite clear that the economy has experienced technology-led growth but the yield curve has rarely been inverted.

This next article alludes to Greenspan’s “conundrum” with him being perplexed that long-term rates were not going higher despite the Fed raising short-term rates and tightening monetary policy. Duh, that’s why long-term rates fell because the bond market viewed this tightening as a catalyst for a future economic slowdown.

I like the author of this article ultimately deferring to the market over “The Maestro” in being far less optimistic about future economic conditions as this snippet shows. 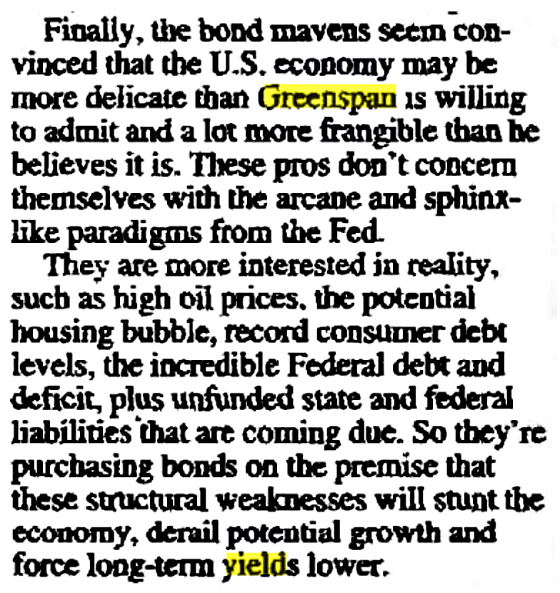 I thought this was a very interesting and helpful chart for investors. One can see that an inverted yield curve does not bode well for the stock market, particularly if a recession ensues. The question marks for the last cycle now have answers and we now know that the market got hammered and we had the worst downturn since the Great Depression. 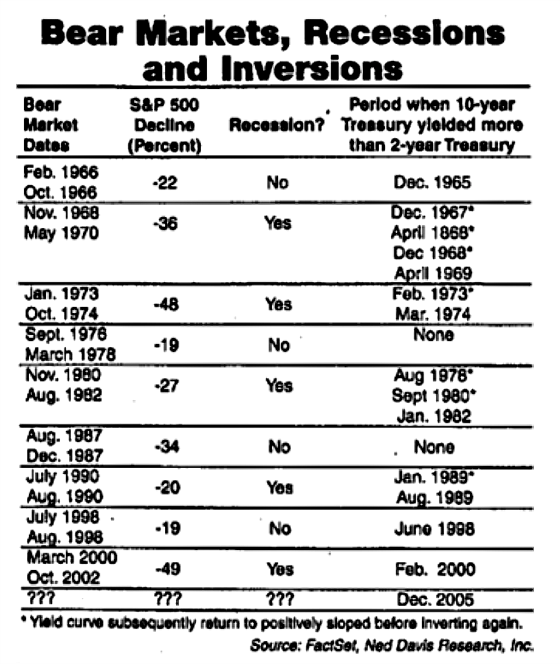 This headline appeared on the same page as the table above and is representative of current economic conditions often times being rather healthy in spite of the yield curve inverting. Markets discount the future by anticipating future outcomes and pricing them in so this is not unusual in that bond investors were looking through current economic strength and seeing clouds on the horizon that led them to believe that the economy would be slowing over the next one to two years. 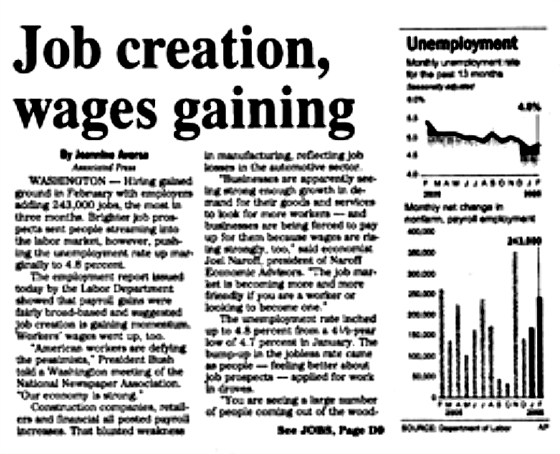 As an aside, here is a more real-time analysis related to a yield curve inversion (10 versus 3-month) and stock market returns over the next year. This is from Sentimentrader.com. 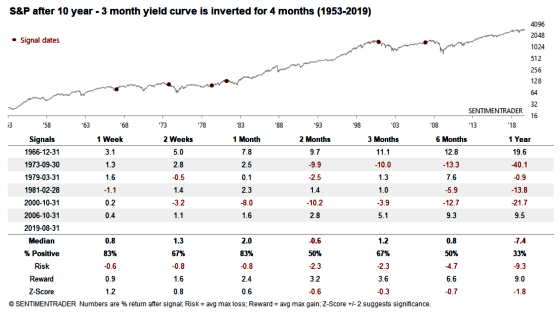 And now back to the articles.

I like this one because it’s also not unusual for Federal Reserve officials to downplay inverted yield curves as precursors to economic weakness. In the next article, Alan Greenspan does this by essentially intimating that this time is different, which is, of course, a very dangerous thing to believe when it comes to investing or human nature. 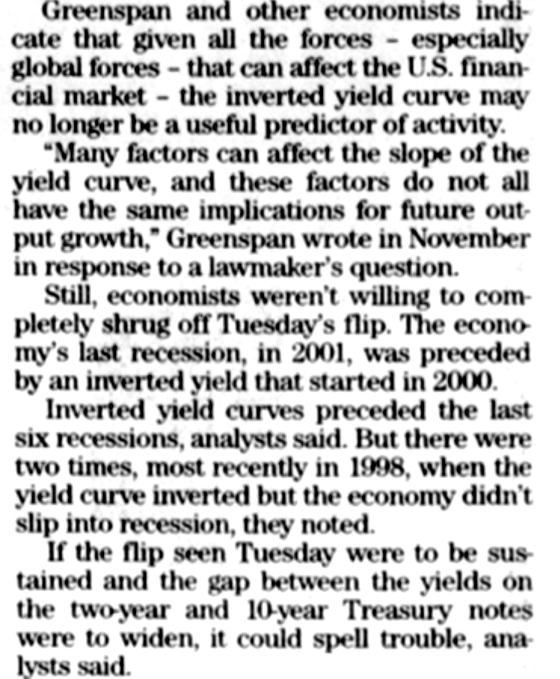 I love this last excerpt. The author refers to the wisdom of the market but also says investors would be stupid to put all of their money into a long-term U.S. government fund. This actually would have been a pretty good strategy for the next six years. 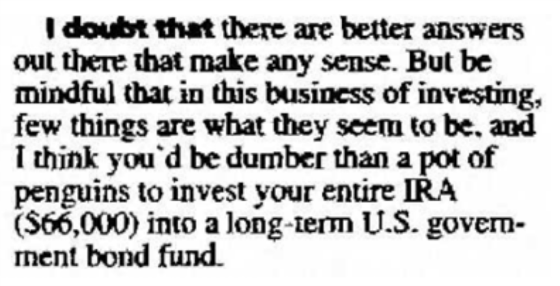 The following is a chart of an ETF comprised of long-term U.S. government bonds of 20 years or longer (TLT) from March 2006 through 8/29/19. One can see that it has appreciated by approximately 45%, so it hasn’t done too poorly. 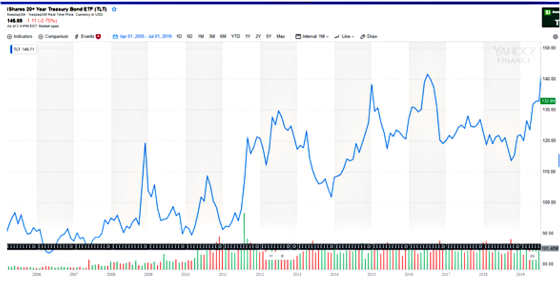 With that being said, the total returns were pretty close to the S&P 500 through 2012 and then the S&P 500 significantly outperformed, generating a total return in excess of 152% during the same time period.

I would bet on economic weakness and a high probability of a contraction over the next 12 to 18 months as there are too many market signals pointing in this direction. Reviewing some of these articles have given me more confidence in thinking that. The market seems to think so as well as it is pricing in a 97% chance the Fed will cut rates by 0.25% at its September 18th meeting and an approximately 56% chance that it will cut by another 0.25% at its October 30th meeting.

One comment on “Ghosts of Inverted Yield Curve Past”