Focus on the Addition by the Elimination of Subtraction 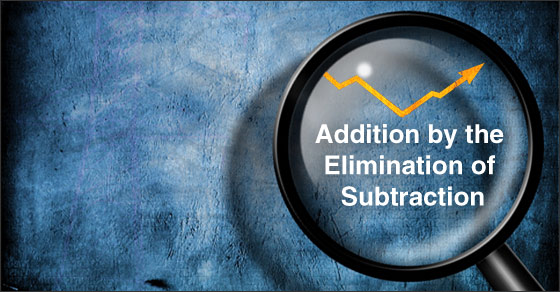 Paul McCulley of PIMCO fame is one of the most interesting, entertaining, and thought-provoking communicators about complex financial subjects, especially in the realm of economics. He is particularly well known for his annual letter that transcribed very in-depth conversations he would have with his beloved pet rabbit Morgan le Fay (sadly deceased now) about pertinent issues concerning investors, particularly bond market participants since that is PIMCO’s expertise. Here is an example of one of his one way conversations from 2000.

McCulley has an uncanny ability to turn a phrase that can so aptly describe something so precisely and perfectly. McCulley coined the phrase “Minsky Moment” to describe what the United States was facing in the wake of the extraordinary subprime and corporate credit collapse which helped usher in the Great Recession. Hyman Minsky was a brilliant, outside of the box thinking economist (like McCulley and my favorite type of economists) whose key insight was that stability breeds instability.

The more things don’t change the more confident investors, particularly borrowers and lenders, are that they will continue to remain stable. This increasing confidence and substantiation by the facts on the ground result in borrowers and lenders taking on more risk because they don’t believe much risk exists. Eventually borrowing structures shift from a solid foundation to being built on quicksand, unable to withstand even a minor setback.

A Minsky Moment was upon the United States in 2007 as it started becoming clear that virtually the entire private mortgage-backed securities market was built on a toxic waste dump of unsound mortgages peddled by Wall Street investment banks to investors around the world and was at risk of collapse. Stability had now bred instability and led to the loss of millions of jobs, a near-global depression, a collapse in mortgage lending by private entities outside of Fannie Mae, Freddie Mac, and FHA, trillion dollar deficits, and significant government regulation of the financial industry.

During the downturn, McCulley was someone I would always read and pay attention to because he seemed to have such a good understanding of how we got in the mess we were in, how we should get out, and what that would mean for investors. I remember watching an interview with him during a time when the economy was showing some signs of bottoming, but it was still dicey, particularly because there was no real recovery in sight for housing. McCulley was actually somewhat positive that GDP would start showing signs of growth. The interviewer was somewhat surprised and incredulous and asked how McCulley could see growth when everything looked so bleak.

McCulley then retorted with what to me was one of his most memorable phrases: Addition by the elimination of subtraction. The interviewer, trying to remain respectful, but you knew he was wondering what kind of nonsense he was spewing, asked him what he meant by that. McCulley said that once something stops going down, or going down less, it can actually make the overall economic growth rate not be as negative and may even make it go positive if enough other areas of the economy are growing. Here is an example of this in graphical form: 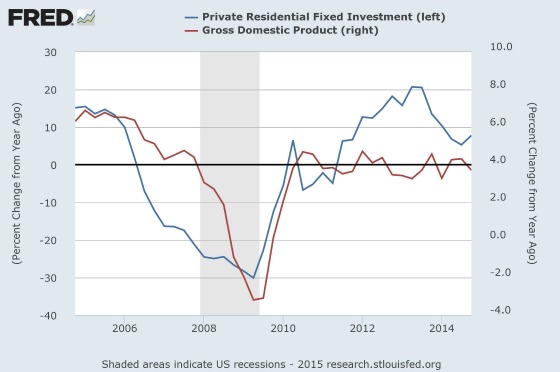 In other words, they’re not adjusted for inflation. GDP started turning positive in the fourth quarter of 2009 despite housing investment being a negative 12.6%. One of the reasons GDP was able to move into the positive range was because housing investment was negative 22.7% the previous quarter and negative 30.1% the quarter before that! This is a perfect example of addition by the elimination of (or reduction of) subtraction.

It’s interesting to see how stable nominal GDP growth has been since 2010, despite housing being a much more positive contributor. As the baton was handed back to housing somewhat, other areas of the economy did not have to grow as quickly anymore to keep the same overall level of growth.

So what does this have to do with anything? Blog readers probably know by now that I’m very interested in the link between happiness and wealth and what truly brings satisfaction and joy to people’s lives and how money can play a role as an adder or detractor. It’s been documented widely that after a certain level of income and wealth more money does not tend to make people happier. Yet, most people when asked would obviously prefer to have more money than less despite widespread acknowledgment that money doesn’t buy happiness.

In an interesting side note, I read an interesting study about young people called Broke Young People Remain Convinced They’ll Be Millionaires One Day. As the following chart shows, 28% of millennials polled (18 to 34) believe they will be a millionaire in their lifetime. This is despite the fact that 46% still live at home and 28 million of them neither go to school nor make more than $10,000 per year. Do You Expect To Be a Millionaire in Your Lifetime?

For a frame of reference, in 2013 there were an estimated 9.6 million millionaire households in the United States. This equates to approximately 8% of U.S. households. It’s somewhat akin to about 80% of people think they’re above average drivers, which is not possible. It’s good to see that young people remain optimistic on average, because if you’re not optimistic when you’re young then when will you be?!

Let’s get back to my main point now. So what does money and happiness have to do with “addition by the elimination of subtraction”? I was reading a summary of an interesting study looking at wealth and happiness but from a more unique angle. Their research shows that rich people and poor people are not materially different in terms of happiness, but there is a marked difference in how sad they get on a daily basis. Rich people are much less sad than poor people on a daily basis.

“Using the most sophisticated measures of emotional well-being in a large-scale survey of the American population, we found that wealthier individuals reported less sadness but no more happiness during their daily activities,” says the study, which is published in the journal Social Psychological and Personality Science

This makes a lot of sense in that having more financial means should allow some the greater ability to recover from setbacks than someone without sufficient resources. Someone on the financial edge whose car breaks down may have to miss work to get it handled and it’s probably a job they can’t do remotely for part of the day by phone, email, etc. They may have to get a second job to make the payment or borrow money at a high rate of interest.

Wealthier people typically don’t face the same burdens that can really set someone back who is not nearly as well off. This somewhat reminds me of the movie Arthur when someone asks Arthur (played by Dudley Moore) what it’s like to be rich and he replied that “It doesn’t suck.” He didn’t say it’s the most amazing thing anyone could dream of. Instead, he was basically saying that it helped him be less down than he probably otherwise would have been.

At CWS, we have a top-notch property management team running our apartment communities day to day. Their results often compare quite favorable to the competition. I often say, however, that the best way of winning in our business is by not losing. While it’s critical that we do the blocking and tackling the day in and day out to provide excellent service, well-maintained properties, and a terrific leasing staff and marketing program to attract high-quality residents, it’s absolutely vital we don’t go backward with management lapses. This can compound upon itself and lead to properties having to dig out of big holes when management issues can result in vacant units which then need to be priced lower than they should be.

This, in turn, can lead to lowering standards and attracting a less desirable resident base, higher expenses for marketing and maintenance due to more difficult residents, and a negative reputation which can make it even more difficult to recover. To avoid this it is absolutely critical to make sure red flags are discovered early because if they are not then a property’s performance can snowball rapidly downhill like I just described if a manager loses focus or interest. Having early warning systems of problems arising and a deep bench to quickly replace those who are not doing what it takes to be successful to recover quickly are vital to make sure we are able to win by not losing.

This is another example of “addition by the elimination of subtraction.” It’s not only a vitally important principle for how we operate our business at CWS, but it has great application to all of our lives. Establish a margin of safety so that:

Focus First on Eliminating the Subtractions

By focusing first on eliminating the subtractions then we put ourselves in a much better position to attaining our life goals and then end up with the additions that can add to the quality of our experiences and relationships.

Thank you, Paul McCulley, for pointing out such an important principle that goes far beyond economics and financial markets to life itself.

What are your thoughts on addition by the elimination of subtraction?